This units turbo pump (a Varian SQ266) failed and the department were unable to source a replacement so decided to sell the instrument. Other than the turbo pump, the system was in full working order.

We didn't get chance to photograph the unit in the lab, as we had to remove it quite quickly, and is currently stored safely in our warehouse awaiting sale.

Please be aware there is a few cosmetic marks on the unit, but it is generally in good condition.

The instrument is a high performance MALDI-TOF/TOF mass spectrometer used predominately for analysis of large molecules such as biopolymers. The Ultraflex can perform mass measurement of femtomole quantities of peptides, proteins, nucleic acids, and synthetic polymers. In addition, it is capable of performing tandem mass spectrometry experiments for structural elucidation of organic molecules or, more commonly, for sequence identification of peptides in support of proteomics research.

The following Software would normally be required (these are not included):

Other Software /cables may also be required. 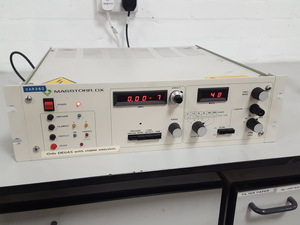 This unit was removed from a chemistry lab as surplus to requirements.

The lab assured us it was in full working order prior to removal.

We have only tested it to power-on ourselves.

This unit was removed from a university chemistry lab as surplus to requirements.

The lab manager assured us it was working when last used - but we have only tested it to power-on at our site.

This unit was removed from a university chemistry lab as surplus to requirements in a system.

We were assured it was working when last used, but we have only tested it to power-on.