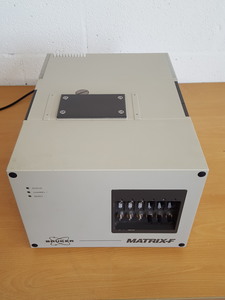 This Bruker Matrix-F FT-NIR Spectrometer was removed from a university laboratory where it was surplus to requirements.

The unit powers on but has not been tested any further.

It is in good cosmetic condition but has no accessories or software included. This is just the main unit of the system.

This Perkin Elmer FT-IR 2000 Spectrum System was removed from a university lab where it was surplus to requirements.

The system is in heavily used cosmetic condition and some parts appear to be either missing or broken. The unit has been pieced back together for the pictures.

The system consists of;

The unit shows 'Power On' when switched on but we were not able to test it any further.

The unit shows 'Power On' & Laser On' power LEDs when switched on but we were not able to test any further.

The unit also includes a Perkin Elmer Spectrum 2000 NIR FT-Raman. This unit is not attached to the main system and should be bolted together but it is not. For the pictures, it has been placed where it should be. There may be more parts missing. We are unusure.

Nd:YAG and/ or GaAs.

The unit is untested.

The nit Shows 'Power On' LED when switched on. It was not tested any further. The laser head connection cable is not included.

The unit Shows 'Power On' & 'Ready' LEDs when powered up. It was not tested any further. The 'Heated Line' input is not secured in the back of the unit.

This is a wooden case containing various parts. We were unable to tell if everything that should be is in the case. The foam interior has quite deteriorated.

It appears to be in good condition and comes with manuals and a PC Floppy Disk.

Box of Perkin Elmer Spectrum Software Floppy Disks. There does not appear to be full sets of some of the software.

Was possibly removed from the main unit?

Some of the parts appear to have been removed from the main system.

This Philips PYE Unicam SP3-200S Infrared Spectrophotometer was removed from a university lab where it was surplus to requirements.

The unit powers on but has not been tested further. It is in reasonable cosmetic condition but has been used previously.